Click here for our Stone and Grout Care Guide!

If you’ve been to our homepage recently, you might have noticed the exciting news that two of our products were featured in the Homekeeping section of the October 2008 issue of Martha Stewart Living magazine. The good people at Martha Stewart Living singled out our Grout Guard Restorer plus our Grease and Grime Buster as outstanding products for consumers to use for grout cleaning and restoration.

Even though these products just recently appeared in Martha Stewart Living, it’s actually been in the works for quite some time now.  How this all came about makes for a pretty interesting story, so here’s how our Grout Guard Restorer plus our Grease and Grime Buster got featured and promoted in the October 2008 issue:

Early in November of 2007 the Editorial Department of Martha Stewart Living magazine contacted us to let us know that they were going to be writing an article on cleaning grout and tile.  They told us that they were going to want to test our grout cleaner/restorer alongside five (5) other national brands that cleaned tile and grout. 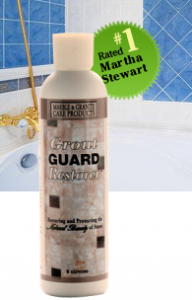 A month later, they informed us that the tile and grout cleaning results were tabulated and that our Grout Guard Restorer plus our Grease and Grime Buster produced the best results!  We were thrilled to have knocked the socks off the competition.  In a competition like that you have to have an outstanding product that actually works in order to come out on top. Not only did Martha Stewart Living share with us the good news about the competition, they asked us for permission to feature and promote Grout Guard Restorer and Grease and Grime Buster in a future story; naturally our answer was YES!

About a year later, the story finally came to print in the October issue and just before Thanksgiving they published a modified version of that print story on their website.  You can read the online version for yourself here.
Click here to read the article